“HIROGARI” is a 2U (10 ✕ 10 ✕ 20 cm) CubeSat. The bus system is based on the design of OPUSAT, which is our previous Cubesat. In this project, we introduce a new system modeling methodology which is suitable for nano-satellite development by students. This satellite is to be launched in the early 2021, and to be released from ISS(International Space Station) 1 or 2 month(s) after the launch.

“HIROGARI” has been developed in collaboration with Muroran Institute of Technology Aerospace Plane System Research Center.
The word “HIROGARI” means “spread” or “expand” in Japanese. “HIROGARI” was named after its missions and our idea of what we want to achieve through this project. 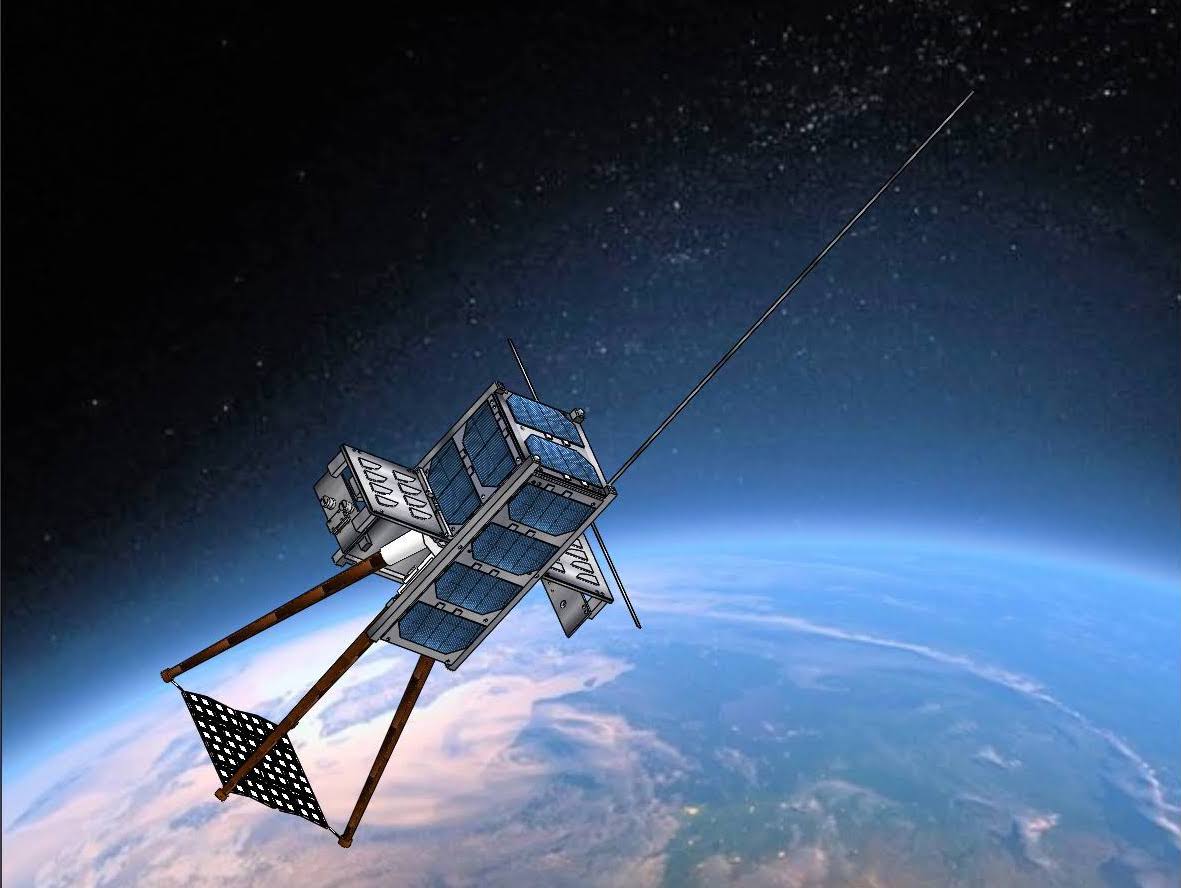 A section of the functions of the satellite system 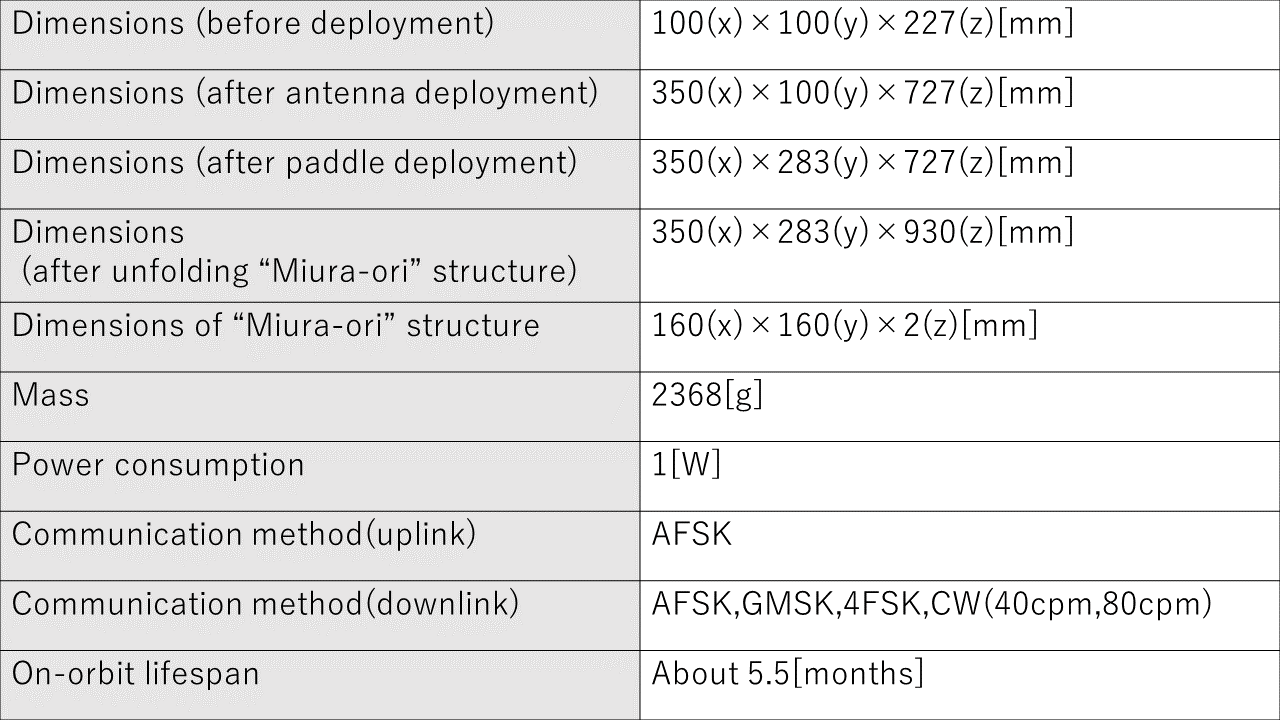 “HIROGARI” has two main missions to be achieved.

Conventional amateur radio satellites mainly use the AX.25 protocol, which requires re-transmission requests from earth stations in case of packet loss, which makes the satellite operation costly. In HIROGARI project, we will demonstrate a protocol using Reed-Solomon encoding and convolutional processing with error correction capability. We will conduct communication experiments to evaluate capability of each protocol and investigate which protocol is suitable for nano-satellite operation. We will also conduct communication experiments to evaluate the usefulness of these communication systems.

If those communication systems are verified to be useful, satellites using amateur radio band will be able to communicate more efficiently. 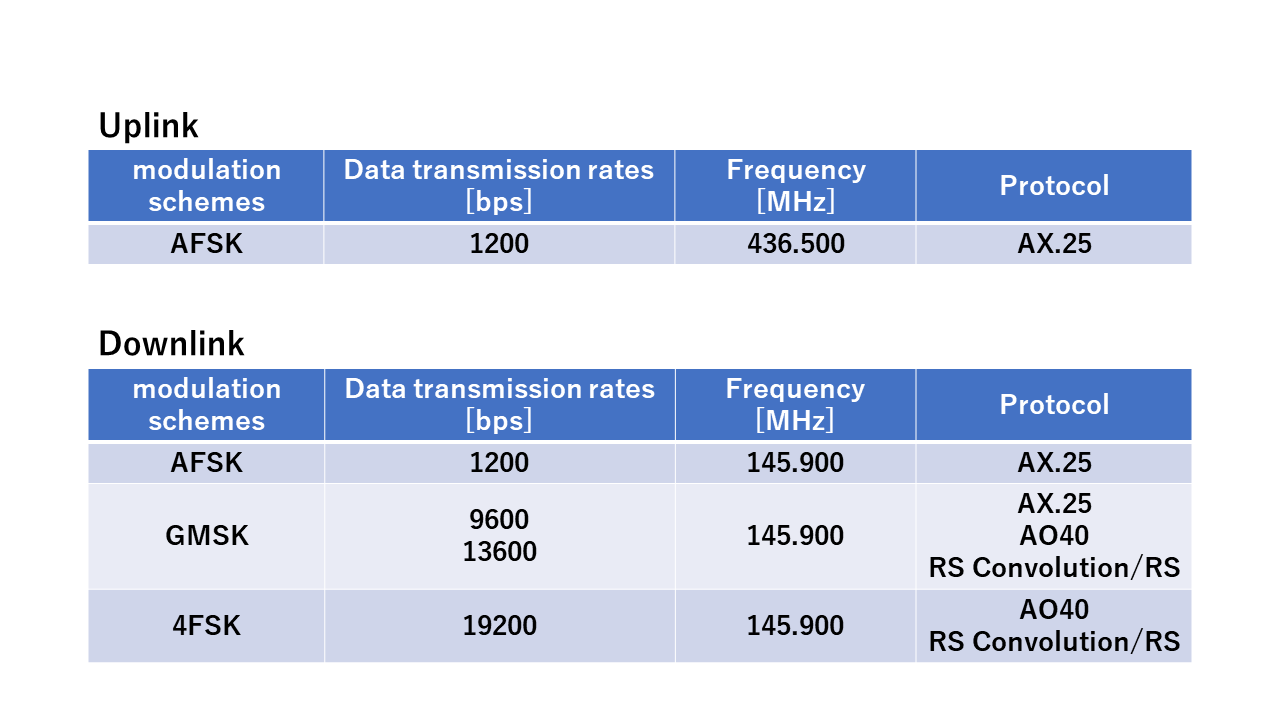 Communication method to be demonstrated

In recent years, there is an increasing need for satellites to be equipped with large-area structures such as solar panels and parabolic antennas in order to carry out more advanced missions. These large-area structures are required to be folded into small pieces due to transportation limitations. It is also necessary to measure whether the shape of the large-area structure meets the requirements of the harsh space environment, such as weightlessness, vacuum, rapid temperature changes, and radiation.

“HIROGARI” is equipped with a two-dimensional unfolding structure based on the “Miura-ori” , which is a method of folding a flat surface such as a sheet of paper into a smaller area, and will deploy it in space. It will also carry an optical surface measurement system using a two-dimensional grid to demonstrate its usefulness. This project will demonstrate the deployment structure and the measurement method in space for the first time in the world.

Two-dimensional deployment based on Miura-ori is applied to a thin plate with thickness. Miura-ori is one of two-dimensional packing and deployment methods, and has an advantage that the pattern can deploy synchronously deployment by a tension toward a diagonal direction, when the thickness can be neglected. On the other hand, in the case of an actual plate, the thickness effect should be considered. We propose a new folding pattern based on the Miura-folding pattern with considering the plate thickness. The research of ORIGAMI engineering with a finite thickness is getting much attention in the world. We have already formulated this folding pattern, and the performance of packing and deployment will be demonstrated in our space project.

Amateur radio operators all over the world can uplink to HIROGARI. When they send a command containing arbitrary character strings, HIROGARI holds it. They can also downlink the character strings held by HIROGARI by uplinking a command. The uplink signals are transmitted with AFSK/FM (1200bps) via AX.25 protocol. Depending on the command, we can select the transmission scheme from four modulation schemes, AFSK/FM (1200bps), GMSK/FM (9600bps), GMSK (13600bps), 4FSK/FM (19200bps) and the protocol from three protocols, AX.25 protocol, protocol using Reed-Solomon encoding, or protocol using Reed-Solomon encoding and convolutional processing. In order to make it easy fore amateur radio operators to construct the receiving system, we will distribute the information about the receiving system using SDR and the software through the Internet. We will also inform the amateur radio operators around the world of the time when they can transmit uplink commands to the HIROGARI through the Internet. We will award the amateur radio operators who succeed in receiving character string.

The OPUSAT-KIT bus system, which is based on the OPUSAT design and demonstrated in orbit, is utilized for HIROGARI. The height of HIROGARI is 20 cm and the bus system of OPUSAT-KIT occupies an area of about 7 cm in height within the satellite. The rest of the space will be used for housing of unfolding structure and the measurement system. 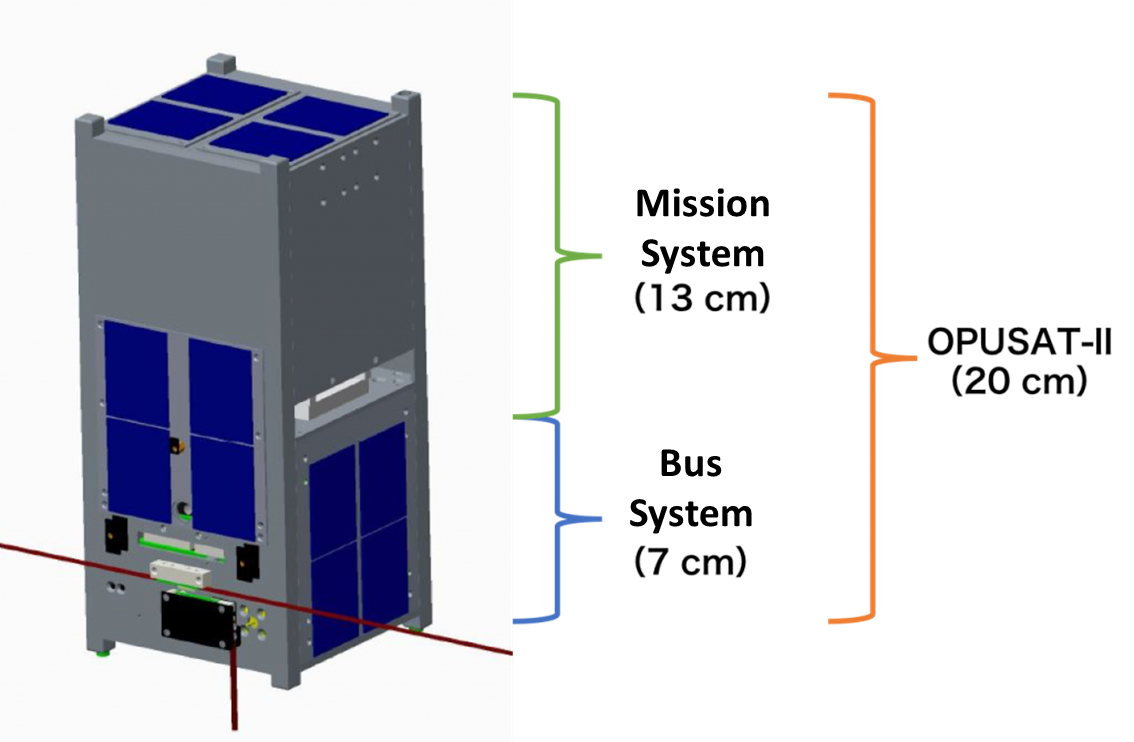 We aim to meet the following Success Criteria. 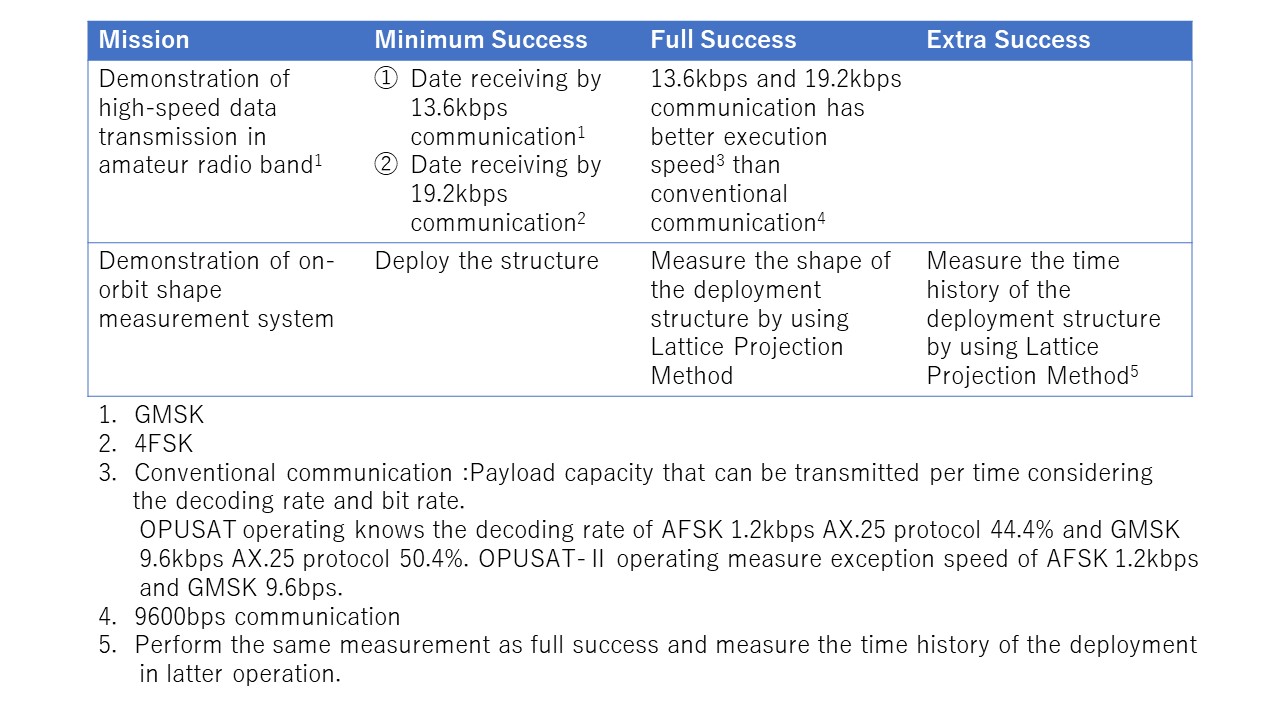 The expected orbital lifetime of “Hirogari” is about 5.5 months. We will follow the flow shown below to complete the missions. 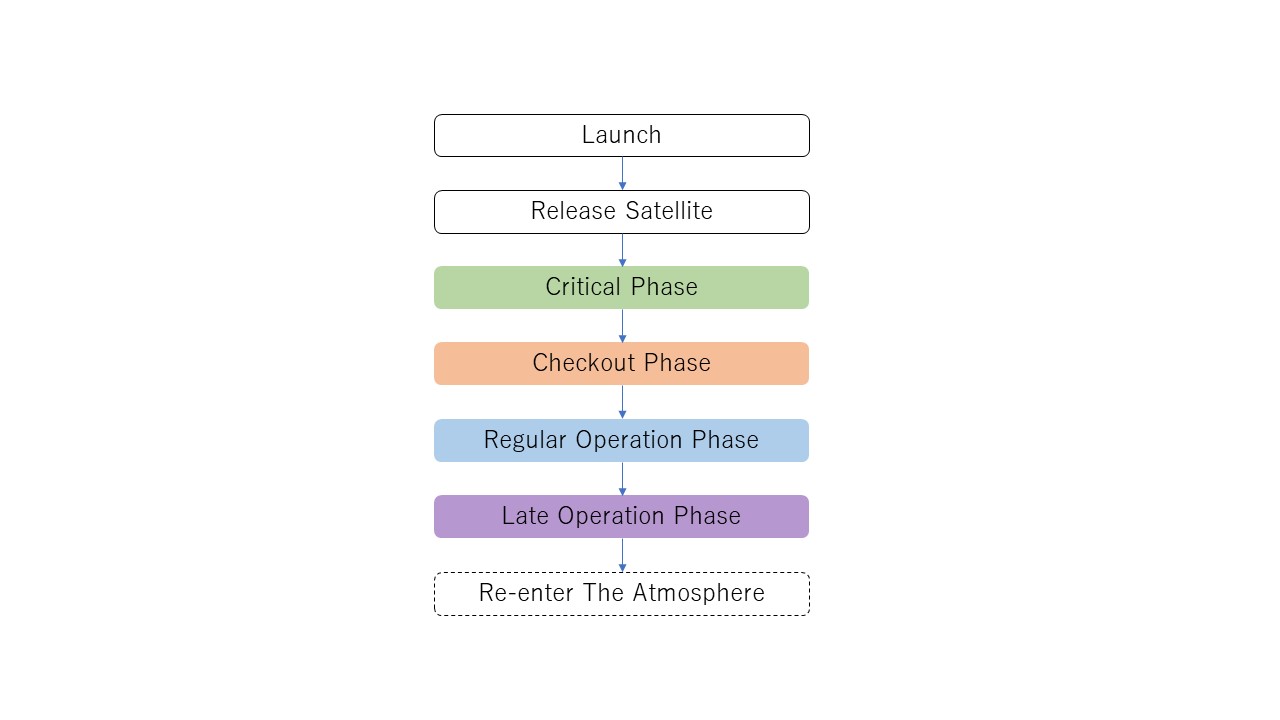 After the satellite is emitted from the emission mechanism, it waits for 33 minutes with no action. After that, it automatically deploys its antennas and begins to emit radio waves. The earth station will attempt to receive HK telemetry from the satellite and we will perform object identification.

From the HK data, which is always downlinked from the satellite, we check the following conditions and confirm the soundness of the satellite.

Then, we attempt to uplink from the earth station to verify the more detailed conditions of the satellite, including the following items to confirm that the satellite is ready to carry out missions.

We perform the following items for succeed of the missions.

If time permits, we will do the following

16th October 2020, we handed over flight model of HIROGARI to JAXA at Tsukuba Space Center.
We continue doing earth station maintenance, developing software for amateur radio message box service, and will start practice of operation of the satellite. 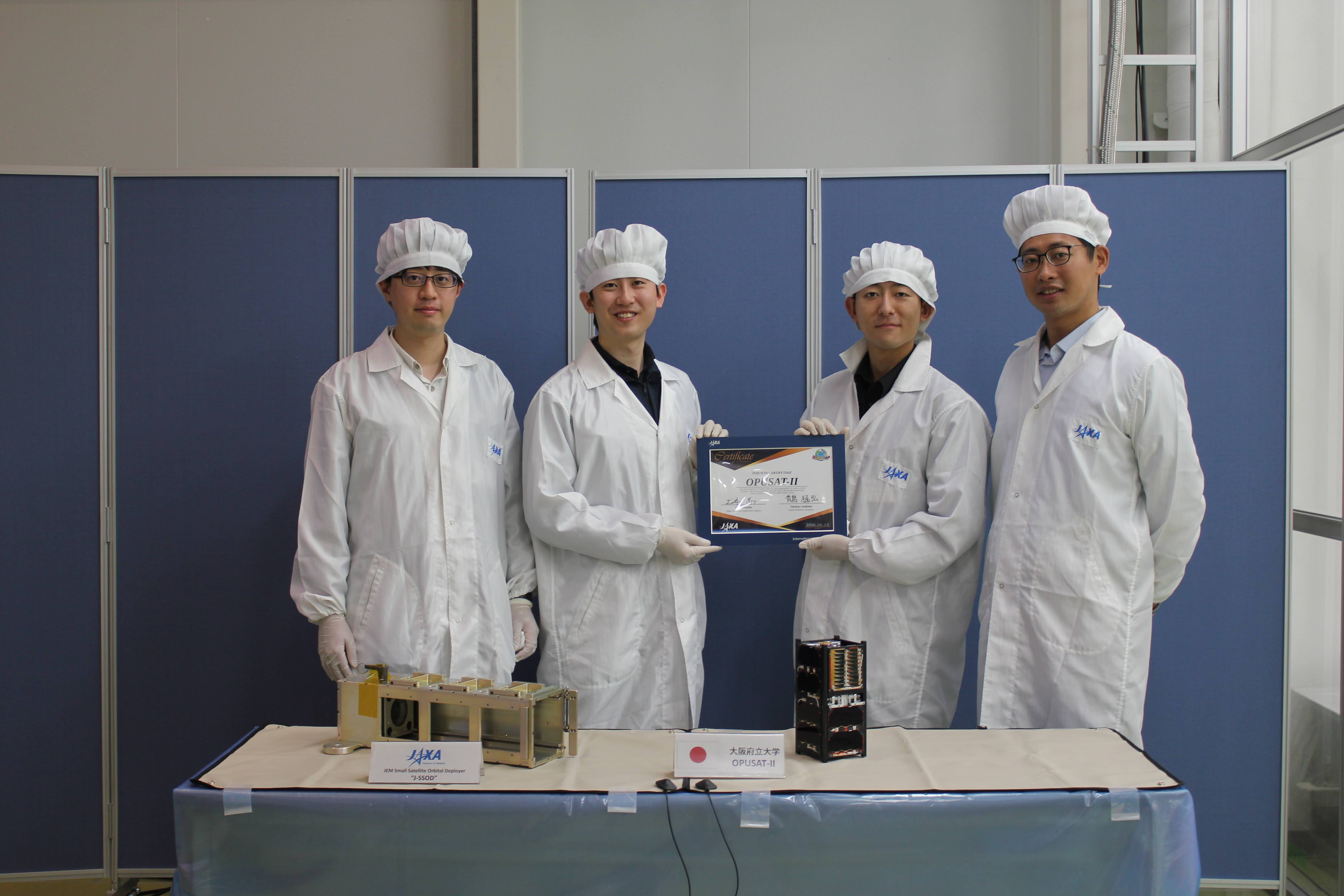 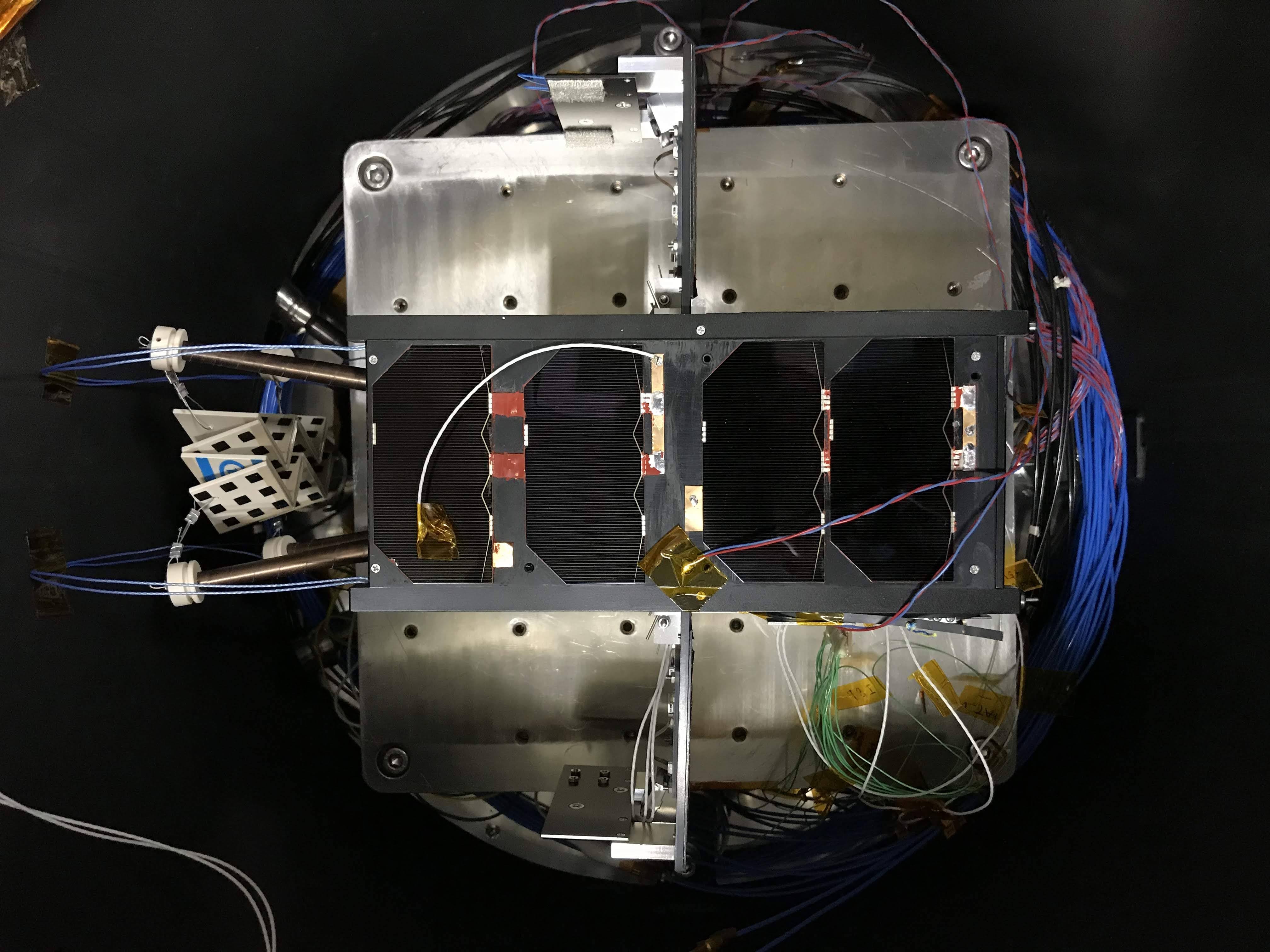 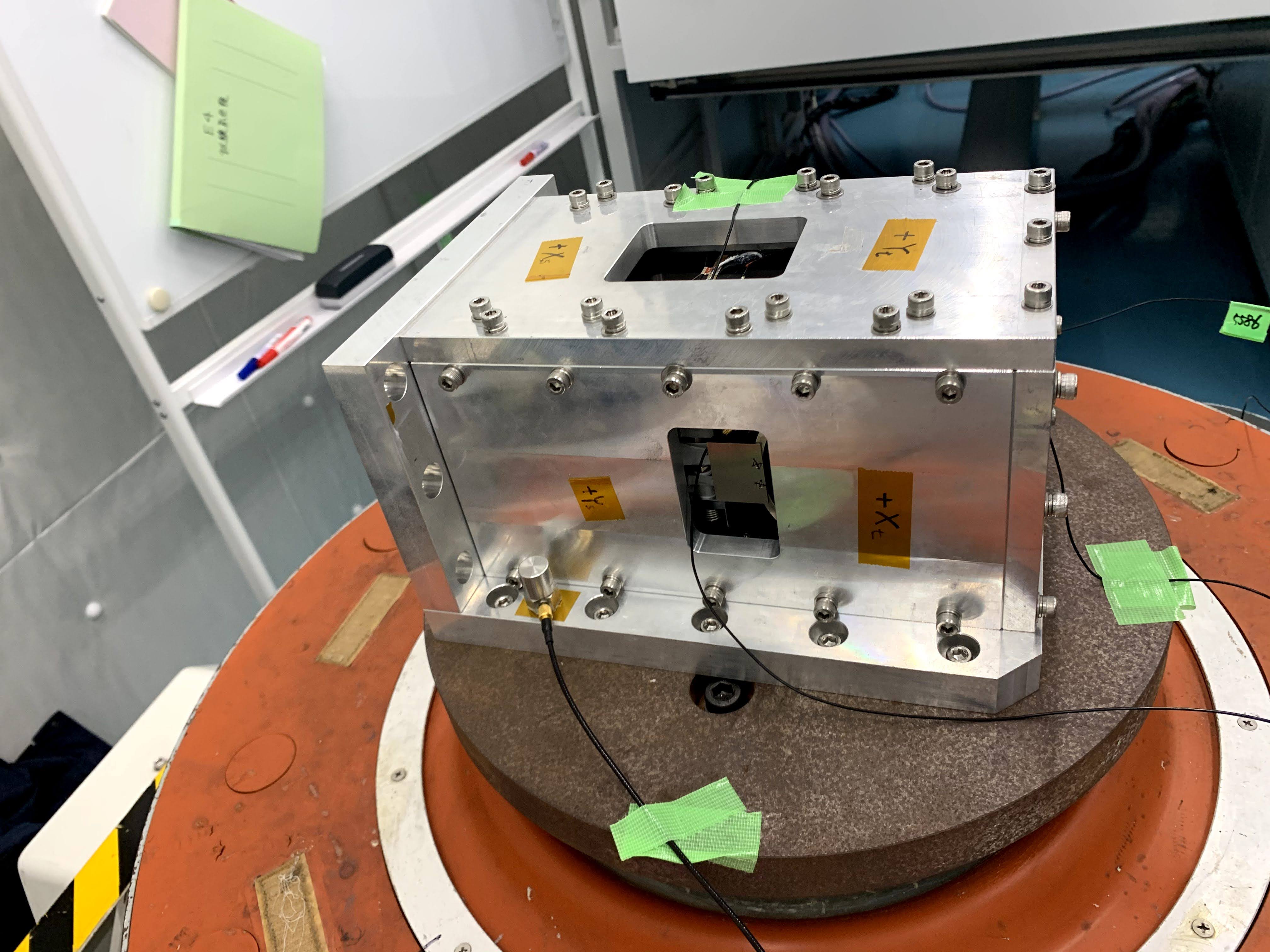 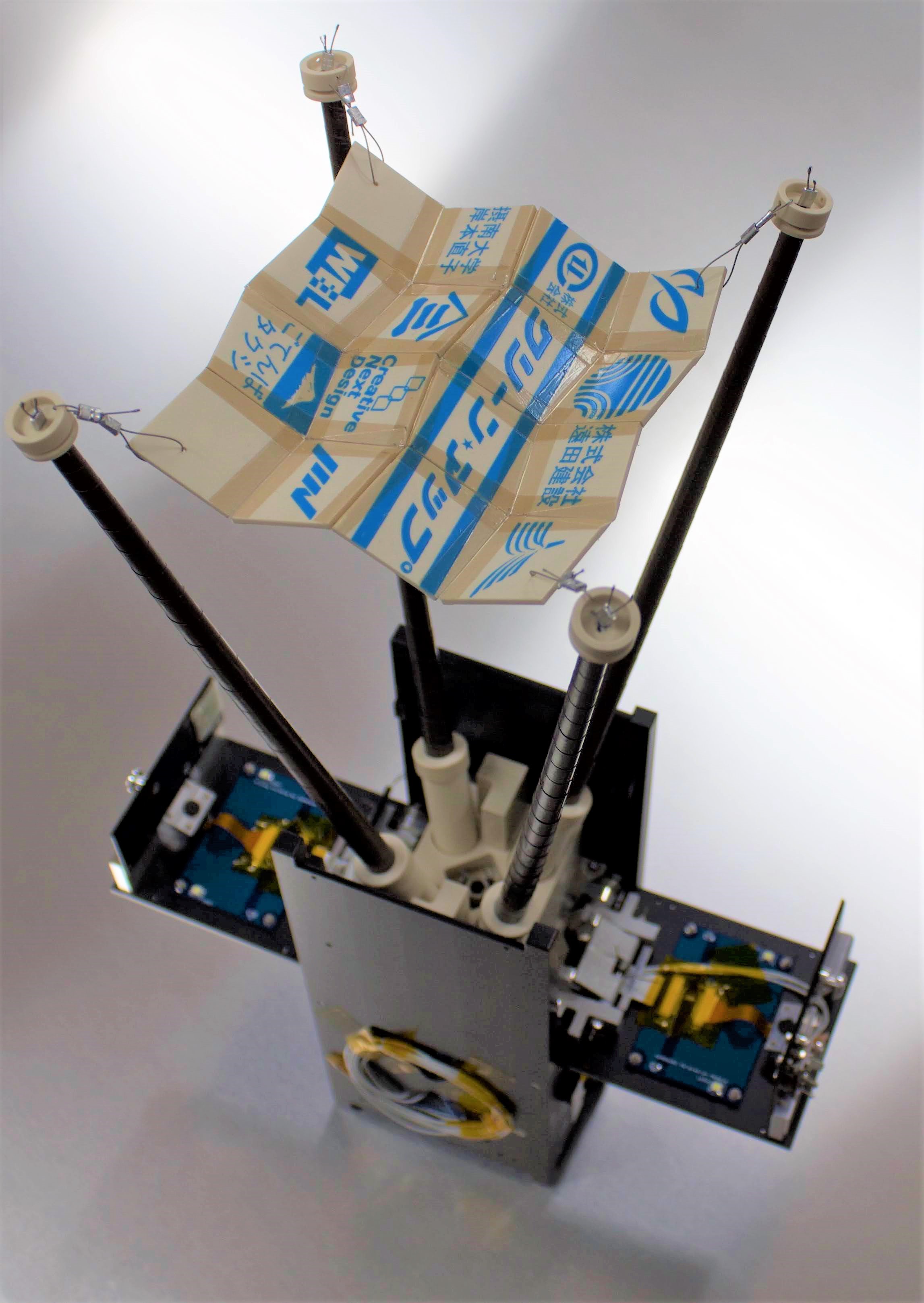 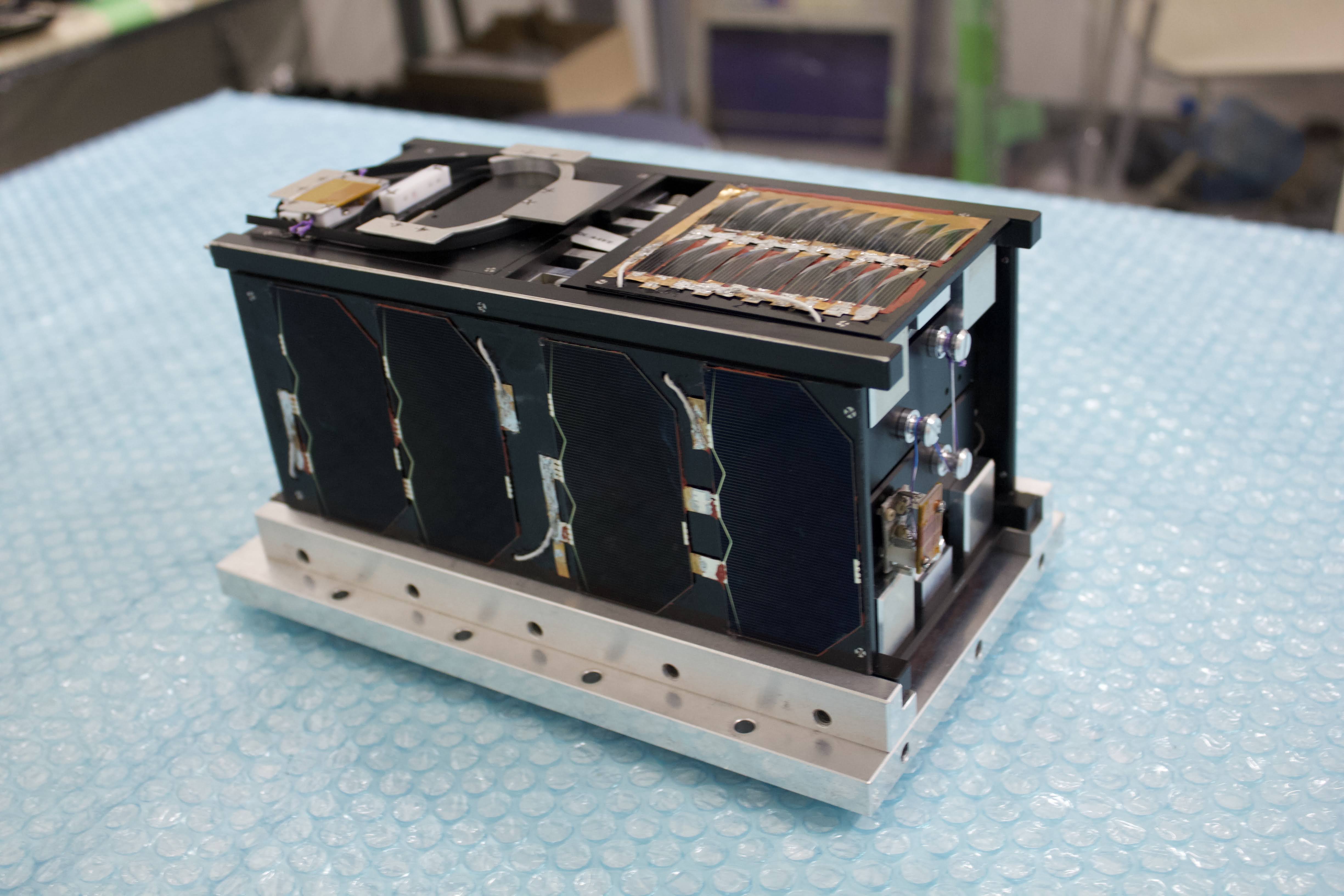 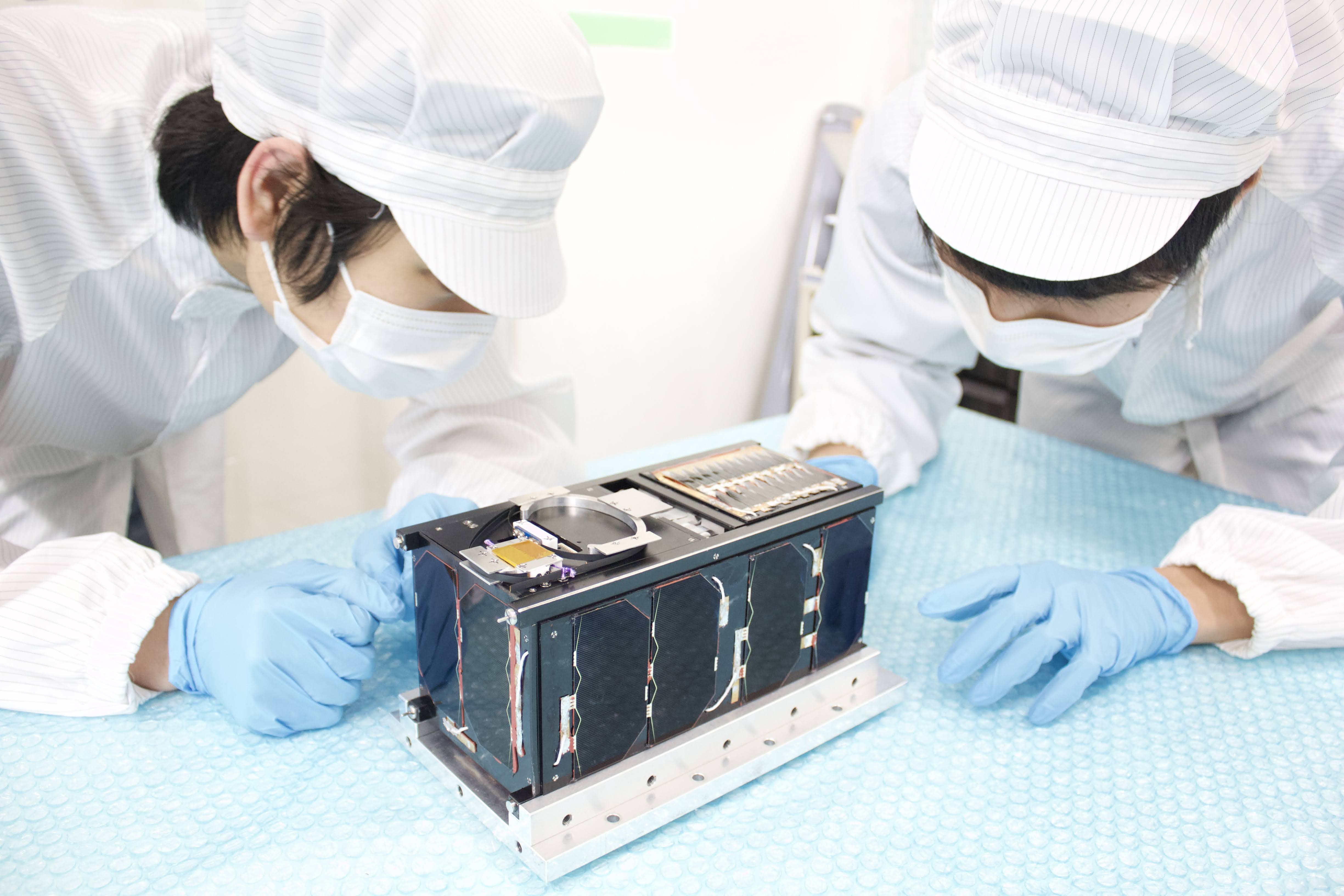